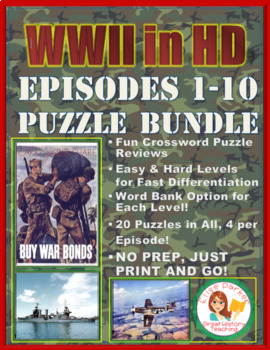 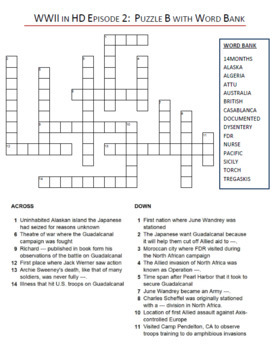 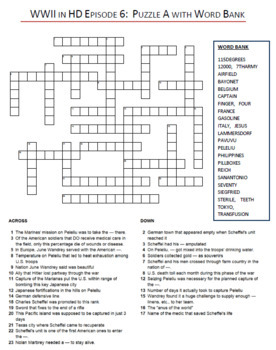 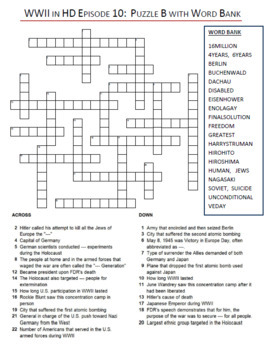 (15 MB|120 pages)
10 Products in this Bundle
10 products
Also included in:
Bundle Description
Engage your students with both basic and advanced crossword puzzles covering every episode of WWII in HD! Each includes a word bank option for easy differentiation -- that's 40 puzzles in the full bundle (4 per episode). Comes with full solution keys and vocabulary / study lists so teachers have everything they need!


WWII in HD is a History Channel series that uses rare color footage, engaging imagery, a wealth of maps, and a lively script to convey the story of the United States participation in World War II. The series helps students trace major events in the war by helping them see them through the eyes of twelve real individuals who lived it. This unique approach helps personalize the war for students, making it far more real to them than can a traditional textbook presentation.

• Episode 1: “Darkness Falls” focuses on the growing crisis in Europe and on the Japanese attack on Pearl Harbor which drew the U.S. into an active role in the war.
• Episode 2: “Hard Way Back” details how the U.S. struggled to achieve victories early in the war, including the assault on Guadalcanal and Operation Torch in the North Africa campaign.
• Episode 3: “Bloody Resolve” examines the costly U.S. victory on the Pacific island of Tarawa in addition to detailing the Allied advance in Italy.
• Episode 4: “Battle Stations” details the preparations and execution of the /Allied D-Day invasion of Normandy. The episode also examines the ongoing U.S. advance across the Pacific.
• Episode 5: “Day of Days” examines the U.S. assault against Saipan in the Pacific as well as the progress of the Allied advance in Europe in the wake of the D-Day invasion.
• Episode 6: “Point of No Return” examines the Allies’ rapid advance toward and through Germany as well as the bloody battles waged by the U.S. on the Pacific islands of Pavuvu and Peleliu.
• Episode 7: “Striking Distance,” analyzes how the U.S. re-took the Philippines even as the Allies continue to strive for victory in Europe.
• Episode 8: “Glory and Guts,” recounts the struggles of American Marines to take Iwo Jima, the importance of the war bond campaign, and the continuing push into Nazi Germany as the war in Europe begins to wind toward an end.
• Episode 9: “Edge of the Abyss” examines two of the war’s final offensives: The Battle of the Bulge in the European Theater and the assault on Iwo Jima in the Pacific Theatre.
• Episode 10: “End Game” recounts the end of the war, including the Allies’ horrifying discovery of Nazi death camps. The episode covers the Holocaust, the Okinawa campaign, the atomic bombings of Japan, Hitler’s suicide and VE-Day, and the final end of the war.

This packet provides teachers with both student materials and instructor answer keys, including everything needed to use the puzzles as a review worksheet or quiz. For each of the tenWWII in HD episodes covered, you will receive:

• A traditional crossword answer key consisting of a solution grid accompanied by the list of clues students used.
• A vocabulary / study list answer key that can make it easier to go over answers out loud with the class. With the list format, you won’t have to hunt for a term on the grid – you can find it listed right alongside its corresponding clue!

I believe in differentiating instruction to best meet student needs. This puzzle packet therefore offers you a lot of different difficulty levels and options. For each episode included, you will get:

• Two different puzzles, designated A and B. Puzzle A is the “advanced” level, containing a variety of both “need to know” and “nice to know” items from the target episode of WWII in HD.
• Puzzle B is the “basic” level, consisting of a simplified version of Puzzle A. As such, it focuses mostly on high-priority “need to know” historical information.
• A word bank option: Both the advanced and basic puzzles are differentiated even further – each one is provided in both a standard format and a word bank format. The standard format just offers students clues and a grid to fill in, while the word bank format also provides students with an alphabetized list of all the answers. The word bank option can be the best approach for students who need that little extra boost to help them complete their WWII review worksheet puzzle!

Puzzles make for a fun review – I know my students look forward to them and always ask me to make more!

If all you want is worksheets for the start and beginning phases of the war, the bundle below might be just what you need: WWII in HD Worksheet Bundle: Episodes 1-5

If all you want is worksheets for the later and ending phases of the war, the bundle below might be just what you need: WWII in HD Worksheet Bundle: Episodes 6-10Individual Episode Packets of Multiple Choice Worksheets for WWII in HD. Most also include both free-response worksheets and True/False "Big Picture" Review Tests!


Total Pages
120 pages
Answer Key
Included
Teaching Duration
2 Weeks
Report this Resource to TpT
Reported resources will be reviewed by our team. Report this resource to let us know if this resource violates TpT’s content guidelines.