Warren G. Harding the Teapot Dome Scandal: Did Harding Know Before His Death? 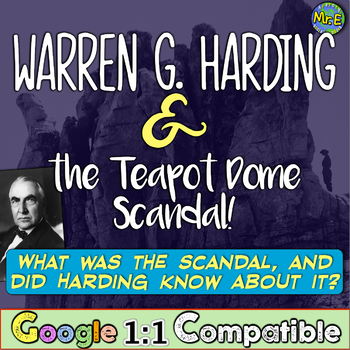 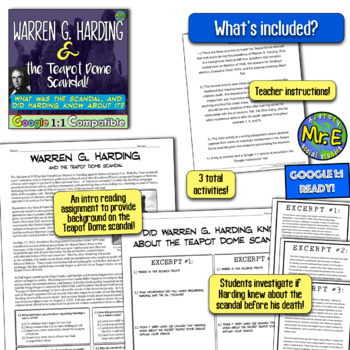 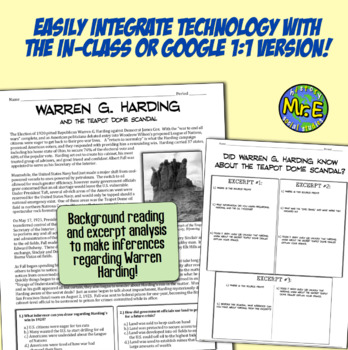 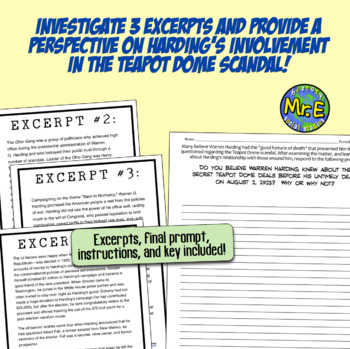 Warren G. Harding the Teapot Dome Scandal: Did Harding Know Before His Death?

This lesson on the Teapot Dome Scandal is included in the Roaring '20s, 1930s, and Great Depression Unit Bundle, located here:

In this engaging and hands-on resource, students learn about the Teapot Dome Scandal that took place under Warren G. Harding's presidency in 1923, one of the largest political scandals in American History. Three assignments are included in this resource. First, a background reading is included to provide background knowledge on the state of the country, the Election of 1920 and the "return to normalcy" promised by the Republican-led Harding campaign, the appointment of Albert Fall to the Secretary of the Interior, Executive Order 3474 that moved control over the Teapot Dome oil field, and the death of Harding (while on his "Voyage of Understanding") as the investigation uncovered corruption within his cabinet. Second, students complete a short excerpt analysis where they investigate three pieces of information related to the Teapot Dome Scandal, the Ohio Gang, the relationship between Warren Harding, oil tycoons, and his cabinet members, and the mysterious actions of Florence Harding (Warren's wife). Finally, students complete a short prompt where they lay out their evidence whether they believe Harding knew about the scandal before the "good fortune of death" saved him from impeachment.

A teacher key and full Google 1:1 version are included!

Total Pages
13 pages
Answer Key
Included
Teaching Duration
3 days
Report this Resource to TpT
Reported resources will be reviewed by our team. Report this resource to let us know if this resource violates TpT’s content guidelines.

Log in
to see state-specific standards (only available in the US).
CCSSRH.9-10.8
Assess the extent to which the reasoning and evidence in a text support the author’s claims.
CCSSRH.9-10.4
Determine the meaning of words and phrases as they are used in a text, including vocabulary describing political, social, or economic aspects of history/social studies.
CCSSRH.9-10.3
Analyze in detail a series of events described in a text; determine whether earlier events caused later ones or simply preceded them.
CCSSRH.9-10.2
Determine the central ideas or information of a primary or secondary source; provide an accurate summary of how key events or ideas develop over the course of the text.
CCSSRH.9-10.1
Cite specific textual evidence to support analysis of primary and secondary sources, attending to such features as the date and origin of the information.