We the People: The Citizen and the Constitution Lesson 12 Worksheet / Test 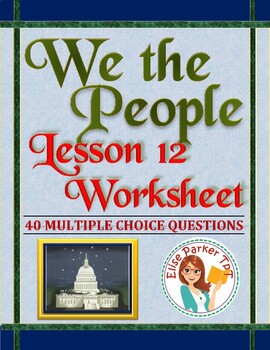 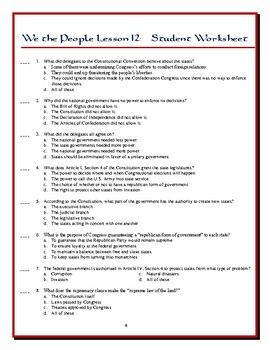 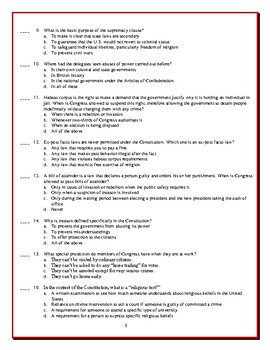 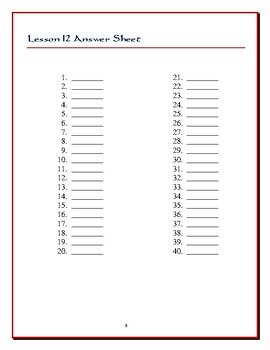 40 Multiple Choice Questions about the relationship between federal and state powers, including the limitations the Framers placed on each in the U.S. Constitution! All questions in lesson order! Includes a fast-grade answer sheet.

This worksheet is intended for use with Lesson 25 of We the People: The Citizen and the Constitution, an excellent high-school level textbook published by the Center for Civic Education.

HOW DO I KNOW I HAVE THE RIGHT BOOK?

If you have used this text, you have probably had the same reaction to it as myself -- fantastic content, placing government concepts in their rich historical context where they are best understood.... but where’s the testing program?

Indeed, the major drawback I have found to the We the People textbook is a lack of strong ancillaries. That is why I have developed my own. This worksheet has been used by real high-school students and has kept them engaged and on-task while providing me, their teacher, with valuable information about how well each of them is mastering government concepts.

This worksheet set includes a fast-grade answer key with a matching student answer sheet so you can rapidly correct several student papers at once! Just line them up and away you go!

THESE WE THE PEOPLE WORKSHEETS USE A PRACTICAL APPROACH!

All questions are presented in “lesson order,” so that they can be used as a guided reading activity if desired. I often use them as tests instead, however, requiring students to answer questions from memory alone. I have found that if students read the text with partners and discuss it along the way, they have excellent recall and can easily achieve scores of 80% and higher even without being able to look in the textbook to check their first impressions.

This worksheet is targeted for use with only one lesson from the We the People textbook. Check back frequently for additional worksheets targeting other lessons from the book. I plan to regularly update my store with more We the People support materials!

This We the People worksheet includes a convenient student answer sheet that is formatted exactly like the answer key. This makes for super-fast grading of multiple choice items! As an added bonus, if students write their answers on the answer sheet instead of on the worksheets themselves, the worksheets will remain blank and can be re-used from year to year without the need to make fresh copies!

"The relationship between national and state powers, more than any other issue, explains the need for the Constitutional Convention. This relationship was at the core of the first major debate, the one between supporters and opponents of the Virginia Plan. After forging the Great Compromise, the delegates worked out a series of other regulations and compromises that defined what the national and state governments could and could not do. Several of those compromises involved the question of slavery, the most potentially divisive issue among the states.

"When you have finished this lesson, you should  be able to

(Quoted from the Center for Civic Education)

LOOKING FOR MORE WE THE PEOPLE MATERIALS?

How about some fun crossword puzzles? This bargain bundle provides you with one or more puzzles for each and every lesson in the book, all of them differentiated into easy and hard levels!

If you're looking for more multiple choice question sets for We the People, check out the links below:

You can get the entire series (50 episodes in all) of Crash Course Government Worksheets in a super money-saving bundle:

YOU CAN ALSO GET CRASH COURSE GOVERNMENT WORKSHEETS IN SMALLER PACKS:

IF YOU'RE READING THE U.S. CONSTITUTION WITH YOUR STUDENTS, YOU MIGHT WANT TO TRY THESE PRIMARY SOURCE WORKSHEETS:

Total Pages
11 pages
Answer Key
Included
Teaching Duration
2 hours
Report this Resource to TpT
Reported resources will be reviewed by our team. Report this resource to let us know if this resource violates TpT’s content guidelines.