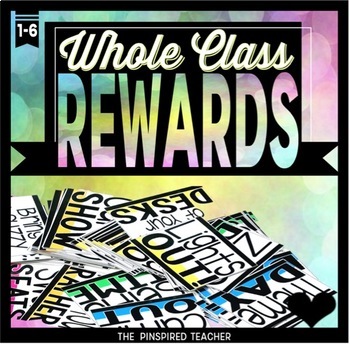 Whole Class Rewards - 95 Reward Coupons to Reward a Class for Positive Behavior! (Perfect for PBIS in your classroom!)

These reward coupons are to be used for whole group or teams, but not individual rewards/incentives.

Use these rewards to make memories! The rewards were specifically designed to build classroom community, celebrate positive behavior, and with each reward build up memories that in the end, create the BEST YEAR EVER!

The rewards are organized by level of fun and as you move to level 5 rewards you'll notice that they are geared more for the end of the year.

Also part of level 5 rewards are:
Theme Day
Beach Day
Mystery Day
If you drool over the #setthestagetoengage hashtag on Instagram then these rewards you can use as you plan your next classroom transformation!

What it means:
Throwback Thursday is a reward you can give, on a Thursday, to repeat any reward that the students have already had. For example, if they loved having lunch in the classroom and you want to do it again as a reward this coupon could be used.

Free Choice FriYAY means YOU or the students get to choose a reward from this resource or any reward you think of! Both of these cards are in each level starting at level 2.

Whether it’s August or May, it’s never too late to regain control of your classroom and start building community. I remember my first years of teaching I would use the Whole Brain Teaching scoreboard but felt like I wouldn’t know what to do to reward their positive behavior. If you can relate, then this resource of 95 rewards will be a gem for you.