Why Do We Celebrate Black History Month (Free) 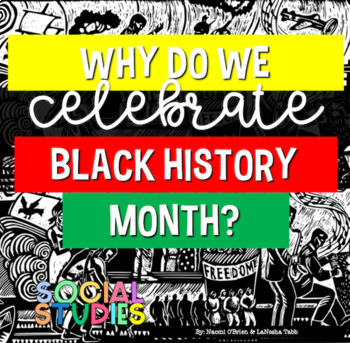 Negro History Week was created by Dr. Carter G. Woodson in 1926 because white people, who had once forced Black people into enslavement, were not teaching about Black people in American history. Slavery was over, but racial terror, lynch mobs and segregation were still in place. White Americans were being racist and divisive, so Black people fought to get their stories told themselves. They knew how important their contributions and achievements were even though white people refused to recognize them.

This month was created out of a need. Black Americans are still fighting to have their stories told year round. Teaching about their history in February is the least we can do to honor them.

If possible, share this with your co-workers/staff at a PD, to ensure everyone knows the why behind Black History Month.

Log in to see state-specific standards (only available in the US).
CCSSSL.2.3
Ask and answer questions about what a speaker says in order to clarify comprehension, gather additional information, or deepen understanding of a topic or issue.
CCSSSL.2.1c
Ask for clarification and further explanation as needed about the topics and texts under discussion.
CCSSSL.2.1b
Build on others’ talk in conversations by linking their comments to the remarks of others.
CCSSSL.2.1a
Follow agreed-upon rules for discussions (e.g., gaining the floor in respectful ways, listening to others with care, speaking one at a time about the topics and texts under discussion).
CCSSSL.2.1
Participate in collaborative conversations with diverse partners about grade 2 topics and texts with peers and adults in small and larger groups.
Total Pages
19 pages
Answer Key
N/A
Teaching Duration
N/A
Report this Resource to TpT
Reported resources will be reviewed by our team. Report this resource to let us know if this resource violates TpT’s content guidelines.