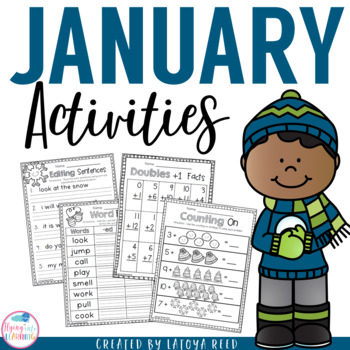 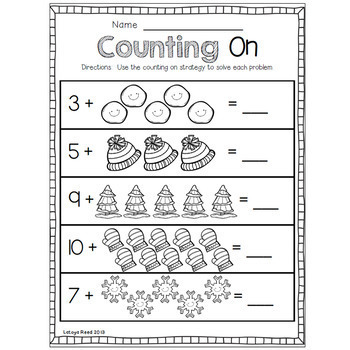 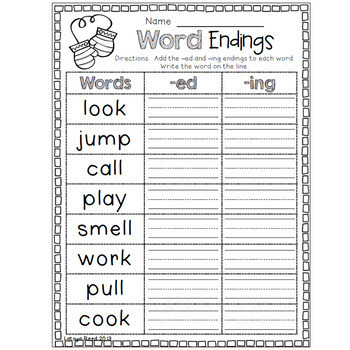 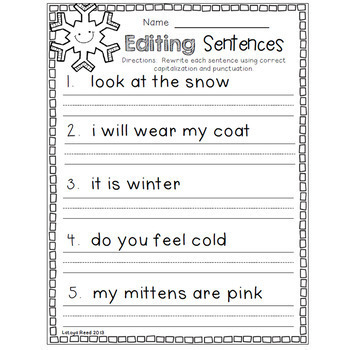 (8 MB|50 pages)
Product Description
This packet contains Winter Activities practice for the month of January to review Common Core ELA and Math skills. It can be used for morning work or classwork or homework. Just Print and go!! There are 50 pages included to make your life much easier. I have included a bonus Snowman mini writing unit. Enjoy and thanks for your support! Don't forget to follow my store for updates and freebies!

DOWNLOAD THE PREVIEW TO GET 5 FREE PAGES FROM THE UNIT!!!

Common Core Math Standards
1.OA.1. Use addition and subtraction within 20 to solve word problems involving situations of adding to, taking from, putting together, taking apart, and comparing, with unknowns in all positions, e.g., by using objects, drawings, and equations with a symbol for the unknown number to represent the problem.1
1.OA.3. Apply properties of operations as strategies to add and subtract.2 Examples: If 8 + 3 = 11 is known, then 3 + 8 = 11 is also known. (Commutative property of addition.) To add 2 + 6 + 4, the second two numbers can be added to make a ten, so 2 + 6 + 4 = 2 + 10 = 12. (Associative property of addition.)
1.OA.8. Determine the unknown whole number in an addition or subtraction equation relating three whole numbers. For example, determine the unknown number that makes the equation true in each of the equations 8 + ? = 11, 5 = _ – 3, 6 + 6 = _.
1.NBT.1. Count to 120, starting at any number less than 120. In this range, read and write numerals and represent a number of objects with a written numeral.
Understand place value.
1.NBT.2. Understand that the two digits of a two-digit number represent amounts of tens and ones.
1.NBT.3. Compare two two-digit numbers based on meanings of the tens and ones digits, recording the results of comparisons with the symbols >, =, and <.
1.NBT.5. Given a two-digit number, mentally find 10 more or 10 less than the number, without having to count; explain the reasoning used.
1.MD.3. Tell and write time in hours and half-hours using analog and digital clocks.
1.MD.4. Organize, represent, and interpret data with up to three categories; ask and answer questions about the total number of data points, how many in each category, and how many more or less are in one category than in another.
1.G.1. Distinguish between defining attributes (e.g., triangles are closed and three-sided) versus non-defining attributes (e.g., color, orientation, overall size) ; build and draw shapes to possess defining attributes.
1.G.3. Partition circles and rectangles into two and four equal shares, describe the shares using the words halves, fourths, and quarters, and use the phrases half of, fourth of, and quarter of. Describe the whole as two of, or four of the shares. Understand for these examples that decomposing into more equal shares creates smaller shares.
Total Pages
50 pages
Answer Key
N/A
Teaching Duration
N/A
Report this Resource to TpT
Reported resources will be reviewed by our team. Report this resource to let us know if this resource violates TpT’s content guidelines.