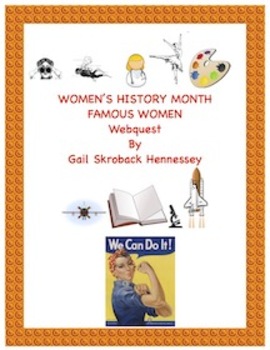 Gail Hennessey
1.4k Followers
Follow
Compatible with Digital Devices
The Teacher-Author has indicated that this resource can be used for device-based learning.
DescriptionReviews86Q&A10

Women’s History month is celebrated each March. It was President Jimmy Carter who was the first president to establish the week of March 8 as National Women’s History Week back in 1980. In 1986, this was made into Women History Month. In 2022, the theme for Women’s History Month is “Women Providing Healing, Promoting hope”. There are many women who have made contributions which have shaped our world.

This web quest with 14 web quests and extension activities be done at any time during the year.Each web question contains information on the women highlighted. Extension links/activities are included as is the key.

Dr. Kathy Sullivan(first female to walk in space/travel down into Mariana Trench(2020)

3. I have lots of other Reader’s Theater Scripts on first ladies in my To Tell the Truth series. Michelle Obama: Michello Obama, A Reader's Theater Script

4. Women who Fought in the Civil War: A Reader's Theater Script: https://www.teacherspayteachers.com/Product/Civil-War-Women-Soldiers-A-Readers-Theater-Script-4153386

5. Women who were pilots during WW2:(members of the WASP): A Reader's Theater Script: https://www.teacherspayteachers.com/Product/World-War-2-Female-PilotsMembers-of-the-WASP-A-Readers-Theater-Script-4378242

You may find these other holiday resources of interest:

2. Show your students that even candy has a history!Learn facts including marshmallows date back to 2000 BC and King Tut's Tomb contained licorice. Several additional resources and extension activities,too. Skills include:reading for information and using research/computer skills.(Great for Halloween, Valentine's Day or for a Friday activity! History of Candy

3. Great back to school activity! Learn about pencils, paper and pens with this informative web quest! Did you know that 2 billion pencils are made each year just in the United States?Skills include:reading for information and using research/computer skills. Pencils/Paper, Pens Webquest

4. With 12 informational web questions, this resource is just the thing to use as a learning tool about the holiday of Halloween. Bats, Owls, pumpkins, the human skeleton, the origin of Halloween, superstitions, and famous stories in literature, are covered. There are comprehension questions, lots of fun facts, extension activities(including writing in the content area), and additional links for teachers. Halloween Webquest

6. April Fool's Day: Want to introduce your students to the history of April Fool's Day? This resource provides a reading for students as well as lots of interesting famous April Fool's Day pranks such as this one that happened in Switzerland in 1957.A news show aired a video on a spaghetti harvest in the country of Switzerland. People were pulling strands of spaghetti dangling down from trees. People actually called the news show asking how they could purchase a spaghetti tree! Additionally, there are extension activities as well as a Test your April Fool's Day IQ(can you spot the True News Stories from the Fake ones?). There are also comprehension questions for the students to answer after reviewing the resource.One class period for Grades 4 and up. April Fools' Day Readings, Fun-Facts and Activities

7. The idea to foster contributions of African Americans began with Dr. Carter G. Woodson, back in 1926. Love his motto to live by-"It is never too late to learn!" Check out my web quest for Black History Month:Black History Month Webquest

8. Try this informative web quest on Martin Luther King! Grades 4 and up. One of Martin Luther King's quotes, “Injustice anywhere is a threat to justice everywhere.” I have added comprehension questions and additional links/extension activities. Skills include:reading for information and using research/computer skills.Martin Luther King