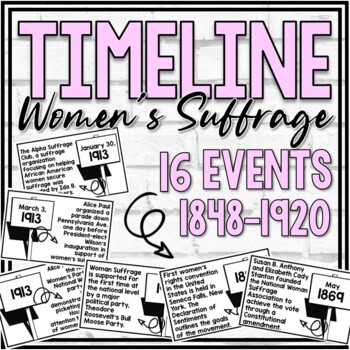 This resource includes 17 key events from the Women’s Suffrage Movement, a full set of timeline cards without dates (to be used in a timeline sort), and a blank template (for students to add additional events to the timeline.) This resource also includes a timeline graphic organizer (to use with the timeline sort and/or the bulletin board.) I’ve included two versions (one with lines and one without lines.) Choose the version that works best for your students. Print back-to-back. Each side has space to record 12 events. If you print back-to-back, your students will have space to record 24 events.

Over a dozen links to videos and resources related to women's suffrage are also included in this resource.