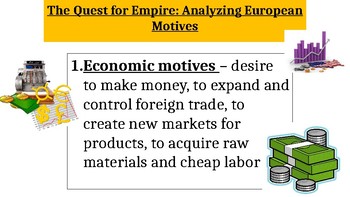 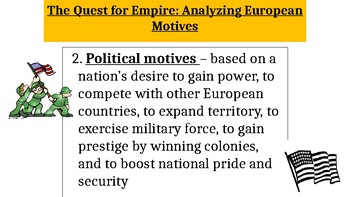 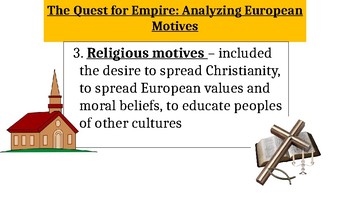 This is a powerpoint based on describing the main motives of imperialism, forms of control, forms of management, and the effects of it on the world, both politically, socially and economically.

This is the powerpoint that goes along with the note-taker called World History: Chapter 27, Section 2: Imperialism and its effects

There is another version of this powerpoint that includes all this information PLUS what is imperialism, how Africa was before imperialism, factors that promoted imperialism of Africa, Berlin Conference, five major motives of imperialism, effects of imperialism, and many more. It also has embedded in it two kinds of pop quizzes for the kids to take that help them to practice identifying the motives.

That product is called World History: Chapter 27, Section 1: Imperialism and The Scramble for Africa

At the Head of the Class