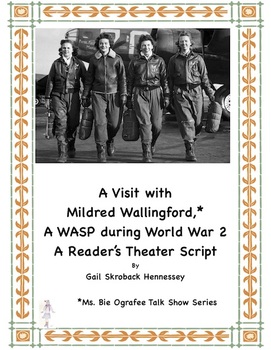 During WW2, it was very unusual for a woman to be a pilot. When there was a shortage of male pilots due to their being needed in combat, an experimental project was begun where female pilots would be used by the military(although they weren't part of the military) to assist with ferrying aircrafts from the manufacturers to military bases. Female pilots, WomenAir Force Service Pilots,(WASP) also would test repaired planes to see if they were SAFE for male pilots to fly. They also were asked to help train soldiers by towing targets behind their airplane for the soldiers to shoot at(with REAL ammunition). Out of the 1074 WASP, 38 would die(11 in training missions). After the war, these heroic women were basically forgotten. In fact, what they did was classified. They could not call themselves "veterans", nor did they qualify for any military benefits. This wouldn't change until 1977. This play covers what it was like for a female member of the WASP and how their contributions were ignored but eventually honored for all that they did during World War 2.

Great for Women's History Month, study on World War 2 or for a substitute or day before a holiday when you wish to introduce kids to some areas of history in our country.

This Reader's Theater Script using a compilation of women to create Mildred Wallingford, a member of the WASP. Real members are also mentioned throughout the reading.

Part of my Ms. Bie Ografee Talk Show Series, students learn about this important contribution to the war effort as a "studio audience" asks questions of Ms. Bie Ografee's guest. A Did You Know? fun facts, comprehension questions, links to additional information, a teacher page with extension activities and the key are also included.

Other Resources of Possible Interest:

3. Susan B. Anthony: Nicknamed “the Moses of Her Sex”, Susan B. Anthony was a civil rights leader involved with the antislavery movement and the women’s rights and suffrage movement. She caused quite a commotion when, in 1872, she tried to do something most unusual for a woman. She attempted to vote in a presidential election: https://www.teacherspayteachers.com/Product/Susan-B-Anthony-A-Readers-Theater-ScriptWomens-History-Month-2304130

4. Elizabeth Blackwell: Today, there are many women in the medical profession but Elizabeth was the very first woman doctor in not just the United States, but in England, too! It wasn’t easy becoming the first woman to get her degree in medicine. Still Elizabeth didn’t give up and worked even harder to change the opinions of people who thought she could never become a doctor. This fun/informative play uses the format of Blackwell being a guest on a talk show and the studio audience asks questions about her life. Ms. Bie Ografee's Talk Show Series.Includes: Comprehension/Did You Know?section extension activities/links/key. https://www.teacherspayteachers.com/Product/Elizabeth-Blackwell-A-Readers-Theater-Script-2369216

5. Learn about Katherine Johnson, a physicist, space scientist and mathematician, who played a very important role with NASA’s early space missions. The movie Hidden Figures highlights the role of NASA's "computers" such as Katherine Johnson and their contributions. Part of my Ms. Bie Ografee Talk Show Series of Reader's Theater Scripts, there are comprehension questions, a Did You Know? section, a Teacher page with extensions/links and key. A great STEM biography! https://www.teacherspayteachers.com/Product/Katherine-Johnson-ScientistThe-Computer-that-Wore-SkirtsPlay-2961216

6. A Ms. Bie Ografee Talk Show Reader's Theater Script.Use this informational and fun script for students to learn about Marie Curie, the Polish scientist who was a pioneer in the area of radioactivity. *Students will find some of the uses of radioactive materials in the 1920s most interesting(as did I). Radium was placed in toothpaste to make teeth whiter, it was placed in shampoo, face creams, even chocolate! Even Marie and Pierre kept a glass jar with radium salt on their night stand because they were fascinated by its glow. People didn't realize the harmfulness of radioactivity. A "studio" audience asks questions of Ms. Bie Ografee's guest, Marie Curie. There are comprehension questions, a Did You Know? section, a Teacher Page with extension activities, key and additional links: https://www.teacherspayteachers.com/Product/Marie-Curie-Scientist-A-Readers-Theater-Script-2494460

7. A Biologist and marine zoologist, Rachel Carson’s books shared her love of nature, especially the ocean and its inhabitants. Her book, Silent Spring, sparked concern in how chemical pesticides were harming our environment. Carson helped to start the environmental movement in our country, which led to the creation of the U.S. Environmental Protection Agency. This Reader's Theater Script could be used as a STEM biography any time of year or especially during the time of Earth Day: https://www.teacherspayteachers.com/Product/Rachel-Carson-A-Readers-Theater-Script-3071478

8. Using Primary Sources in the Classroom. A DBQ activity uses primary sources. Sources can include diaries, posters, music, news articles from the time, anything written by those who participated in or witnessed an event in history. Students review the given documents and use many cognitive skills in processing what they see and read. After gathering information using the documents, students develop an essay answering a question, in this case, “Describe Life on the Homefront During World War 2”, citing several of the documents reviewed. A teacher page includes the Key and suggestions for a rubric to grade this Primary Source( DBQ activity): https://www.teacherspayteachers.com/Product/DBQDocument-Based-QuestionActivityLife-on-the-Homefront-During-WW2-1127932