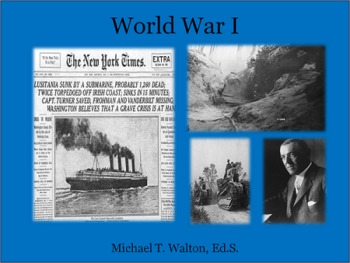 This is a complete two-week unit, but could be extended to three, on World War I covering the Virginia Standards of Learning (SOLs), which includes an overview, the MAIN causes, alliances, trench warfare, United States' entry into the war, changed political boundaries after the war, and Woodrow Wilson's leadership after the war to include his Fourteen Points and his failed attempt for the US to join the League of Nations.

This unit includes the following:

The first lesson is an overview in which I show a video. The video is called "America in the 20th Century: World War I: The War in Europe" which can be downloaded at www.unitedstreaming.com. The video is 27:51 long.

I've been working on this since my high school student-teaching experience almost 10 years ago, but have tweaked this unit to fit middle school students since that's the grade level I now teach.

I hope this helps anyone looking to teach this unit. Thank you.

Total Pages
Approximately 185
Answer Key
Included
Teaching Duration
N/A
Report this Resource to TpT
Reported resources will be reviewed by our team. Report this resource to let us know if this resource violates TpT’s content guidelines.