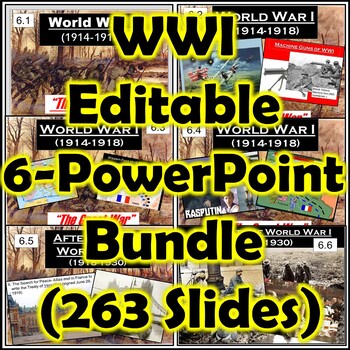 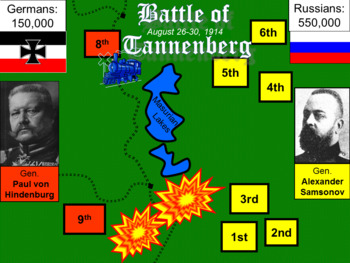 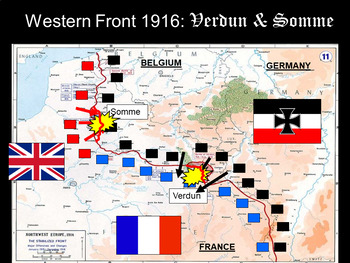 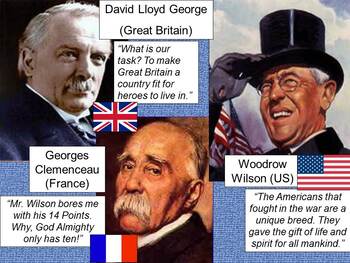 Thank you for considering this product bundle. This awesome bundle contains 6 epic EDITABLE PowerPoints (total of 263 slides) that are filled with HUNDREDS of great pictures, explanations, animations, detailed and captivating BATTLE ANIMATIONS and sound effects. It will bring history alive for you and your students!

This is far beyond the normal PowerPoints you're used to. My PowerPoints are a mix of outline with important fill-in names, words and terms. Some slides will contain the outline portions with images, while other slides are fully for visual demonstration. Please check out the preview and I'm sure you'll agree.

Here is a preview of each included presentation (each can be purchased individually as well):

6.1 (48 slides) The Great War Begins: is part of an epic 6-part series (6.1 through 6.6) that covers the entire Great War and the early 20th century. 6.1 in particular covers the causes of WWI, the beginning of the war, the personalities involved and the opening battles of Marne and Tannenberg. Wonderful battle animations included!

6.2 (45 slides) The Great War Becomes Total War: in particular covers the development of trench warfare, the devastating new weapons and the grim necessity of Total War where everyone is involved and therefore a target.

6.3 (42 slides) WWI Across Many Battlefronts: in particular covers the various battle front (Eastern, Western, etc.), Italy joining the Allied Powers, the battle of Jutland, the Gallipoli campaign, aerial combat, the huge battles on the Western front in 1916-1917 like Verdun, Somme and Passchendaele.

6.4 (53 slides) US Entry in the War to German Surrender: in particular covers the collapse of Russia; the rise of Lenin and the communists; the Zimmermann Telegram and the entry of the US into the war; the final German and Allied offensives and the collapse of Germany and the abdication of the kaiser.

6.6 (31 slides) The Aftermath of WWI: in particular covers the death toll; the “Lost Generation”; the new literature and artistic movements; the building of the US; the stock market crash and Great Depression.

»»»This product would be awesome for any Jr. High or High School World, US or Western Civilization History class. It can work perfectly for various age groups and ability levels.

»»»Embedded in these PowerPoint are the printable Guided Notes for this lesson. The notes document is included (editable Word & pdf)

I also encourage you to check out these other WWI themed materials available from my store (click on link):

The First Battle of the Marne

The Russian Revolution and the Rise of the Soviet Union

6.3 WWI Across Many Battlefronts

6.4 US Entry in the War to German Surrender

6.5 The Treaty of Versailles and the Russian Revolution

6.6 The Aftermath of the War

Thank you and enjoy!! This bundle is marked at a huge discount. If you like this product, please leave a positive comment...

Total Pages
263 pages
Answer Key
Included
Teaching Duration
2 Weeks
Report this Resource to TpT
Reported resources will be reviewed by our team. Report this resource to let us know if this resource violates TpT’s content guidelines.

Log in
to see state-specific standards (only available in the US).
CCSSRH.9-10.7
Integrate quantitative or technical analysis (e.g., charts, research data) with qualitative analysis in print or digital text.
CCSSRH.9-10.5
Analyze how a text uses structure to emphasize key points or advance an explanation or analysis.
CCSSRH.9-10.4
Determine the meaning of words and phrases as they are used in a text, including vocabulary describing political, social, or economic aspects of history/social studies.