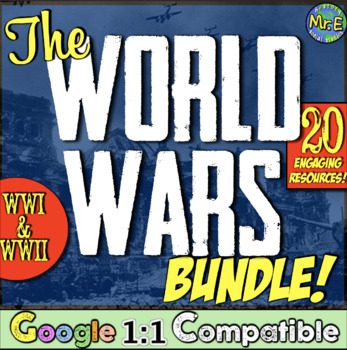 In the World War 1 and World War 2 Bundle, you receive TWENTY total resources to teach WWI and WW2. Each resource has been designed to increase engagement, promote higher-level thinking, and create higher-level learners. Google 1:1 compatible resources are also included in this product! Use in either a traditional setting or in the 1:1 environment! Buy the World War Bundle and Save a Bundle!

Included in this bundle are:

✔ 1.) The Many Causes of World War I: Students analyze the 5 Causes of WWI!

✔ 3.) Life in the Trenches: An examination into Trench Warfare in World War One!

✔ 4.) Fact-Checking the Treaty of Versailles! Students Analyze the End of World War I!

✔ 5.) Gas Warfare and WWI: A CSI on the use of Chemical Gas during World War I!

✔ 6.) The Zimmerman Telegram: A Primary Source Analysis on the US Entry into WWI!

✔ 1.) The Rise of Germany: From Versailles to World War Two! The Beginnings of WWII!

✔ 3.) A Date Which Will Live in Infamy: A Common Core Analysis of FDR & World War II!

✔ 4.) The Japanese Attack on Pearl Harbor in WWII! An Interactive and Engaging Show!

✔ 5.) The Holocaust: Students explore 6 centers on the Holocaust & life in the camps!

✔ 7.) Aftermath of the Atomic Bomb: What Consequences Lingered?

Total Pages
355 pages
Answer Key
Included
Teaching Duration
2 months
Report this Resource to TpT
Reported resources will be reviewed by our team. Report this resource to let us know if this resource violates TpT’s content guidelines.

Log in
to see state-specific standards (only available in the US).
CCSSWHST.6-8.7
Conduct short research projects to answer a question (including a self-generated question), drawing on several sources and generating additional related, focused questions that allow for multiple avenues of exploration.
CCSSWHST.6-8.1c
Use words, phrases, and clauses to create cohesion and clarify the relationships among claim(s), counterclaims, reasons, and evidence.
CCSSWHST.6-8.1b
Support claim(s) with logical reasoning and relevant, accurate data and evidence that demonstrate an understanding of the topic or text, using credible sources.
CCSSWHST.6-8.1a
Introduce claim(s) about a topic or issue, acknowledge and distinguish the claim(s) from alternate or opposing claims, and organize the reasons and evidence logically.
CCSSRH.9-10.10
By the end of grade 10, read and comprehend history/social studies texts in the grades 9–10 text complexity band independently and proficiently.