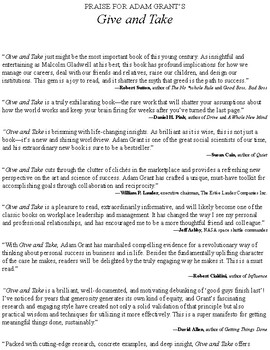 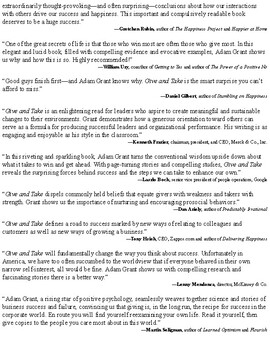 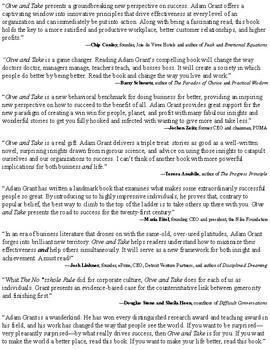 Give and take “Give and Take just might be the most important book of this young century. As insightful and entertaining as Malcolm Gladwell at his best, this book has profound implications for how we manage our careers, deal with our friends and relatives, raise our children, and design our institutions. This gem is a joy to read, and it shatters the myth that greed is the path to success.” —Robert Sutton, author of The No *s shole Rule and Good Boss, Bad Boss.

They like to get more than they give. They tilt reciprocity in their own favor, putting their own interests ahead of others’ needs. Takers believe that the world is a competitive, dog-eat-dog place. They feel that to succeed, they need to be better than others. To prove their competence, they self-promote and make sure they get plenty of credit for their efforts. Garden-variety takers aren’t cruel or cutthroat; they’re just cautious and self-protective.

“If I don’t look out for myself first,” takers think, “no one will.” Had David Hornik been more of a taker, he would have given Danny Shader a deadline, putting his goal of landing the investment ahead of Shader’s desire for a flexible timeline. But Hornik is the opposite of a taker; he’s a giver. In the workplace, givers are a relatively rare breed.

They tilt reciprocity in the other direction, preferring to give more than they get. Whereas takers tend to be self-focused, evaluating what other people can offer them, givers are other-focused, paying more attention to what other people need from them. These preferences aren’t about money: givers and takers aren’t distinguished by how much they donate to charity or the compensation that they command from their employers.

If you’re a giver at work, you simply strive to be generous in sharing your time, energy, knowledge, skills, ideas, and connections with other people who can benefit from them.