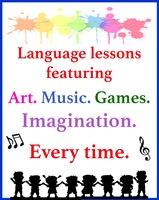 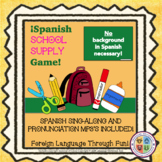 By Language University
This classic memory game includes all materials you will need to teach or review winter clothes in Spanish through fun and music! Whether teachers are experienced with Spanish or not, we are here to help!Content Includes:Game instructionsGame board
Subjects:
Spanish, Music, Winter
Grades:
PreK, Kindergarten, 1st, 2nd
Types:
Activities, Fun Stuff, Games
$2.75
25
Digital Download ZIP (3.77 MB)
ADD TO CART
WISH LIST 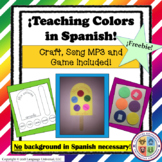 By Language University
This mini lesson introduces students of any age to colors in Spanish through a craft; a Spanish sing-along MP3 (with lyrics); a game, and pronunciation MP3's for target vocabulary! Whether teachers are experienced with Spanish or not, we are here to
Subjects:
Spanish, Visual Arts, Music
Grades:
PreK, Kindergarten, 1st, 2nd, 3rd
Types:
Lesson Plans (Individual), Songs, Games
$5.75
13
Digital Download ZIP (19.63 MB)
ADD TO CART
WISH LIST 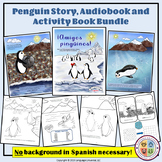 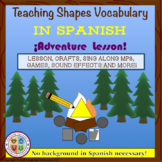 By Language University
Our 29-track album, ¡Listos! is an effective, stress-free and fun option for teaching children Spanish! After a year and a half in production ¡Listos! is listos (ready)! All of our songs are sing-alongs with vocals that are sung in Spanish to
Subjects:
Spanish, Music, Vocal Music
Grades:
PreK, Kindergarten, 1st, 2nd, 3rd
Types:
Fun Stuff, Songs
$10.00
$7.00
9
Digital Download ZIP (39.72 MB)
ADD TO CART
WISH LIST 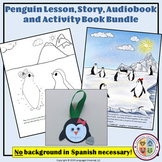 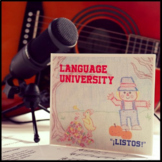 By Language University
Pump up the start of your Spanish classes with our good morning song, "Buenos días, ¿cómo estás?" and end your classes with our cool down goodbye song, "Hasta luego, chicos!" Included you will find these songs with vocals (for all of our teachers
Subjects:
Spanish, Music, Vocal Music
Grades:
PreK, Kindergarten, 1st, 2nd
Types:
Fun Stuff, Songs
$2.00
16
Digital Download ZIP (3.06 MB)
ADD TO CART
WISH LIST 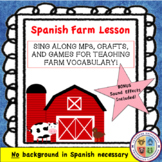 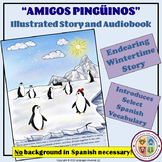 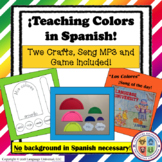 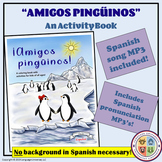 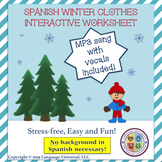 By Language University
This interactive worksheet introduces and/or reviews winter clothes in Spanish and how to say, "What is she/he wearing..." and "He is and isn't wearing..." using the verb "llevar." Whether teachers are experienced with Spanish or not, we don't
Subjects:
Spanish, Music, Winter
Grades:
Not Grade Specific
Types:
Worksheets, Activities, Fun Stuff
$2.00
22
Digital Download ZIP (3.40 MB)
ADD TO CART
WISH LIST 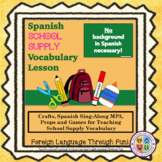 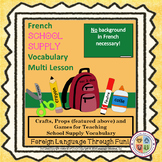 By Language University
This unit introduces students to French school supply vocabulary and phrase "Oú est ça." (where is that?) through a methodology of fun! Whether our lessons are used along side of experienced French teachers or parents who would like to learn with
Subjects:
French, Back to School, Autumn
Grades:
PreK, Kindergarten, 1st, 2nd, 3rd, Homeschool
Types:
Activities, Fun Stuff, Games
$10.00
1
Digital Download ZIP (10.69 MB)
ADD TO CART
WISH LIST

5 Units of "Spanish through FUN!" Bundle!

By Language University
This bundle introduces children to Spanish through a methodology of fun! Each unit comes with multiple crafts, games, activities and songs to keep your students smiling and moving as they learn! Plus we've also included pronunciation MP3's, so you
Subjects:
Spanish, Visual Arts, Music
Grades:
PreK, Kindergarten, 1st, 2nd, Homeschool
Types:
Fun Stuff, Games, Cultural Activities
$48.50
$43.65
Bundle
ADD TO CART
WISH LIST
showing 1-20 of 42
123next ›
Ask Language University a question. They will receive an automated email and will return to answer you as soon as possible. Please Login to ask your question.
TEACHING EXPERIENCE

Lia Andrews is the director and founder of Language University. In 2008, Lia began teaching French and Spanish to children, emphasizing education through music and fun. After studying abroad in France and backpacking through Europe, Lia made it her life’s goal to create a program that would introduce a second language to children.

Language University is a foreign language program for children, and we believe that introducing Spanish, French, Italian or Mandarin should be stress-free and fun! Our classes feature a variety of activities, games, crafts and adventures, as well as our own songs, dances and sound effects, to ensure your students are engaged (and learning!) from start to finish.

Lia Andrews received her BA in both French and English, with a minor in Spanish from West Chester University. She also obtained a Master's degree in French from Middlebury College.

Language U was created by Lia and her business partner, Paul Calvarese who is the co-owner of Language University. Since 2008, he has been giving private language lessons in Spanish, Italian, Portuguese, Beginners’ Mandarin, and English as a Second Language. Paul received his BA in Foreign Languages from the University of Delaware. He also pursued language courses at the University of Costa Rica and the Foreigners’ University of Siena in Italy. Paul has a DELE certification (Diploma of Spanish as a Foreign Language) from Instituto Cervantes (Level C1), as well as a TEFL certification.