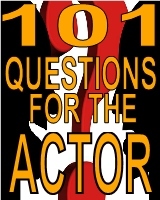 MOTHER GOOSE'S GET TOGETHER, a 1-act musical for performance by young people.

THEATRE RESOURCE: 101 Questions for the Actor

By Make A Dramatic Difference
Want your drama and theatre students to really delve into their characters and know them inside-out and backwards? 101 Questions for the Actor is an awesome activity that can help you accomplish that. Students are given 101 questions to answer as
Subjects:
Creative Writing, Arts, Drama
Grades:
9th, 10th, 11th, 12th
Types:
Research, Fun Stuff, Homework
$4.75
3
Digital Download PDF (0.30 MB)
ADD TO CART
WISH LIST

By Make A Dramatic Difference
"Six who Pass While the Lentils Boil" is perhaps the most popular in Mr. Walker's repertory. The story is of a Queen who, having stepped on the ring-toe of the King's great-aunt, is condemned to die before the clock strikes twelve. The Six who pass
Subjects:
English Language Arts, Arts, Drama
Grades:
7th, 8th, 9th, 10th, 11th, 12th, Higher Education
Types:
Fun Stuff, Scripts, Literacy Center Ideas
$7.50
Digital Download PDF (1.75 MB)
ADD TO CART
WISH LIST

"SHOW OF HANDS", A Romantic Comedy in one-act - for production by young people

Anton Chekhov's THE HESITANT HERO or THE TRAGEDIAN IN SPITE OF HIMSELF, one-act

Michael Blevins is originally from East Tennessee and attended the University of North Carolina, majoring in Acting and Dance and continued his studies in the performing arts at New York University's Tisch School of the Arts. As an ACTOR and Performer he has appeared on the legitimate Broadway stage numerous times, in major motion pictures and network and cable television. He cherishes the many times he has worked closely with Tony and Oscar winnning, directors, choreographers and performers including Sir Richard Attentborough, Bob Fosse, Michael Douglas, Chita Rivera, Robert Downey Jr, Brooke Shields, Jason Alexander, Diane Lane and Bebe Neuwirth to name a few. Blevins is also an accomplished DIRECTOR-CHOREOGRAPHER with credits Off-Broadway, Regional Theaters, National Tours, TV Commercials, and Network Television Specials as well as civic and educational venues. In addition, he is an award-winning. produced and published PLAYWRIGHT, COMPOSER & LYRICIST. He has been a Performing ARTS EDUCATOR for almost 35 years and has taught at some of the world's premier performing arts institutions in the US and abroad. He has turned out and trained several acclaimed and successful performers; plus, he holds the distinctive honor of giving Bob Fosse's and Gwen Verdon's grandson, Sean, his first dance and acting lessons. He has been featured on "Good Morning America" for ABC-TV and on the covers of "Dance Magazine" and "USA Today". Michael Blevins resides on Manhattan's upper west side, and currently serves as the Artistic Director and Co-Founder of New York's GROUP THEATRE TOO. He continues to teach and practice and persue his craft and love of the performing arts. For more visit: http://www.michaelblevins.com

Blevins received the 2012 NJ Tony Award as Best Director-Choreographer for his production of Alan Menken's A CHRISTMAS CAROL: "Best director and choreographer: Michael Blevins (“A Christmas Carol,” Centenary Stage Company). Considering what he accomplished, Blevins must have started rehearsing around the time that Charles Dickens started writing his tale. He cast no fewer than 65 actors, many of whom were children that he’s coached in his invaluable Centenary Young Performers Workshop. They and the adults performed four production numbers, each of which was several minutes long. Blevins threw them an unexpected arm thrust here and an unanticipated slap on the knee there. More than five dozen actors got every move right on opening night. Only the best director-choreographers can get that out of so many people." - Peter Filichia, national theatre critic Blevins also received the Best New Musical Award from Rob Hopper, Executive Director of the National Youth Theatre for his original musical Count to Ten. Also, received Best Of Fest "Honorable Mention for Choreography" featured in the 2009 New York Musical Theatre Festival. Blevins' acclaimed students include Tony Winner Savion Glover, Emmy Winner Jason Samuels Smith, Tony Nominee Melissa Errico, Broadway performer & Tony Nominee Frank Dolce, noted Broadway Dance Center teacher Justin Boccitto, Broadway composer/lyricist Jason Robert Brown, and Emmy Winner & Broadway actor/dancer, Dule Hill, and Anthony Zas, of Disney's Newsies the Musical. Blevins was also asked to teach Macaulay Culkin to tap dance for a Bob Hope TV special.