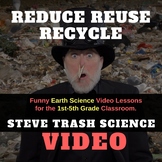 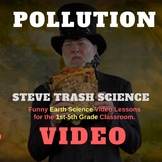 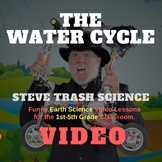 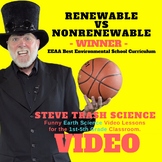 RENEWABLE vs NONRENEWABLE - Video and Review...
FREE
4
My Products
sort by:
Most Recent
view: 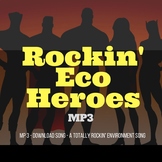 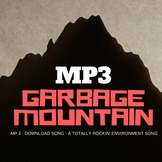 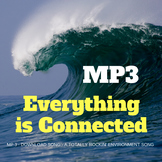 By Steve Trash
MP3 - Download. This song is a rockin' version of the EVERYTHING IS CONNECTING song on my - Green Album. The idea that there is "no away" in nature is kinda counterintuitive so it's important to share it in a fun way. When teaching kids about
Subjects:
Environment, Physical Science, Earth Day
Grades:
1st, 2nd, 3rd, 4th, 5th, Homeschool
Types:
Songs
FREE
1
Digital Download MP3 (5.97 MB)
WISH LIST

By Steve Trash
One of the amazing things about my job as an illusionist and entertainer is that I get to transform the way kids see things. I make garbage disappear and float and change color. It's all a bunch of illusions created with found objects (trash).
Subjects:
Earth Sciences, Environment, Earth Day
Grades:
Kindergarten, 1st, 2nd, 3rd, 4th, 5th, 6th, Homeschool
Types:
Printables, Posters
FREE
1
Digital Download PDF (11.10 MB)
WISH LIST

By Steve Trash
Here's a fun magic trick (by way of illustration) that you can use to kick off a lesson on "The Food Chain". It's a magical (and not very difficult to perform) way to show that everything in the natural world is connected.
Subjects:
Earth Sciences, Environment, Earth Day
Grades:
1st, 2nd, 3rd, 4th, 5th, Homeschool
Types:
Science Centers
FREE
Digital Download PDF (0.18 MB)
WISH LIST

EARTH DAY PROJECTS - Do It Yourself - Trash to Treasure - Set #4

EARTH DAY PROJECTS - Do It Yourself - Trash to Treasure - Set #3

EARTH DAY PROJECTS - Do It Yourself - Trash to Treasure - Set #2

EARTH DAY PROJECTS - Do It Yourself - Trash to Treasure - Set #1

Steve Trash Pledge - Respect Yourself, Others, and the Environment

By Steve Trash
8.5" by 11" pdf printable (high resolution) poster. Earth is, of course, made up of many many ecosystems. Ecosystems are, of course, connected to each other. Everything in an ecosystem is connected as well. Everything in nature is connected is
Subjects:
Earth Sciences, Environment, Earth Day
Grades:
1st, 2nd, 3rd, 4th, 5th, Homeschool
Types:
Posters
FREE
3
Digital Download PDF (1.99 MB)
WISH LIST 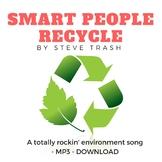 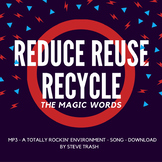 By Steve Trash
mp3 - song - download - 4:43 seconds long - 4.5mbDo you want a fun (and musical) way to teach the value of Reducing Reusing and Recycling? Do you want a fun way to get your students thinking about how to protect the environment? Do you want a fun
Subjects:
Environment, Music, Earth Day
Grades:
1st, 2nd, 3rd, 4th, Homeschool
Types:
Fun Stuff, Songs, Science Centers
FREE
1
Digital Download MP3 (5.11 MB)
WISH LIST
showing 1-20 of 23
12next ›
Ask Steve Trash a question. They will receive an automated email and will return to answer you as soon as possible. Please Login to ask your question.
TEACHING EXPERIENCE

I am a professional eco-entertainer. I tour the world (Australia, Canada, Japan, Spain, Portugal, UAE, and all over the United States) teaching kids about their connection to the natural world through eco-entertainment. I've done this since 1984. I use any method I can find to make the subject of our environment fun and interesting to kids. I have a natural talent for connecting with kids and I use magic tricks (usually made of trash), music (a cigar box guitar - made of an old cigar box), and tons of funny stuff (a giant diaper is a crowd favorite) to get kids excited about their connection to the environment.

From the beginning of my career, I've always felt that if we give kids good science based information, they'll make great decisions about how they effect the environment. I would say my style is... kinda' kooky.

Steve Trash has entertained over 25 million people since 1984. He's appeared in theatres, fairs, and festivals all over the world including: Japan, Australia, Canada, Portugal, Spain and the UAE. He's appeared on CBS, ESPN, CNBC, HLN, and VH1. He's been written about in the New York Times, the Los Angeles Times, CBS Marketwatch, Film Threat, Movie Maker Magazine, Alabama Business Magazine, and Boxing News. He has appeared at the world famous MAGIC CASTLE in Hollywood, California, was a featured guest on LeVar Burton's READING RAINBOW Magic Week, MAKER FAIRE Kansas City, The ENCONTROS MAGICOS Street Magic Festival in Coimbra, Portugal. He was the featured green magic entertainment at the 2011 - KEEP AMERICA BEAUTIFUL - Great American Cleanup" national kickoff in Times Square - New York City. He's been seen on the cover of the kids' magazine THE WEEKLY READER and the "green issue" of MAGIC MAGAZINE. In 2011 - Steve Trash was awarded the Environmental Educator of the Year Award Winner by EEAA. He's a founding board member of Keep The Shoals Beautiful and is a lifetime member of the Alabama Association for Environmental Education. His TRASH and RECYCLE SHOW won the statewide Outstanding Project Award presented by RC&D in 2007. And his KIDS MAKING BETTER CHOICES video (which he wrote, produced, and starred in) won the award in 2009. Also in 2007 MNN - Mother Nature Network added him to their list of "top eco-comedians". In 2009 – he created the worlds first GREEN MAGIC SET (made of renewable bamboo and rubber tree wood) and licensed it Imagiplay Toys. The set made its debut at the American International Toy Fair in New York City. It won the American Specialty Retailers Associations "Share of the Fair" list of outstanding toys. It's also in the world famous illusionist – David Copperfield's personal collection of magic collectables. In 2013 - Steve Trash and Kelvin Holly released - The Trash Tunes – green songs for cool kids and grownups. Serving as an eco-consultant, his brainstorming lead to the creation of THE RECYCLE CYCLE (a mobile recycling edu-station), the LITTER CHAMP CHALLENGE TROPHY (a traveling trophy to promote school campus litter prevention), and the stream-lining of N-HARMONY WITH NATURE (a waste-litter-free outdoor event program) created by Judy Hood, Music Preservation Society, and Keep The Shoals Beautiful. Always on the search to broaden his brand and teach the world to understand "green" just a little better, Steve and his professional musician friend Kelvin Holly (Amazing Rhythm Aces, Little Richard Band, Pegi Young and the Survivors) wrote, produced and recorded an entire album of green themed songs – The Trash Tunes – in 2013. In 2014 Jane Velez-Mitchell (of Headline News & CNN) profiled Steve's work teaching kids around the world about the environment and ecology on her show. In 2014 Steve appeared on the Green Stage at the Oregon Shakespeare Festival in Ashland Oregon. His appearance was sponsored by the Ashland Sustainability Commission. Steve was also green waaaay before green was cool! He actually lives in a green home in the tiny hamlet of Frog Pond, Alabama. The house is earth birmed – (partially underground utilizing the temperature of the earth to regulate the temperature of the house), is designed for thermal mass insulation, features many reduced energy consumption appliances, has a composting bathtub in his backyard and has a 21 panel TEN K SOLAR RAIS WAVE photovoltaic array in his front yard. All resources here on TEACHERS PAY TEACHERS are posted in Steve's Store for FREE. Like what you see? Take it for free and use it in your classroom. Like it a lot? Consider becoming a Steve Trash Patron. For $1 dollar a month, you can support his work. https://www.patreon.com/stevetrash