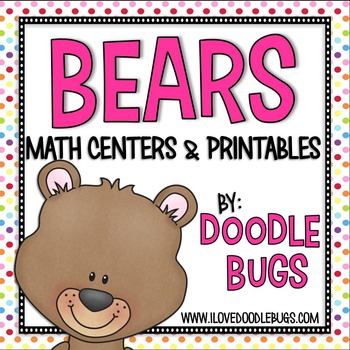 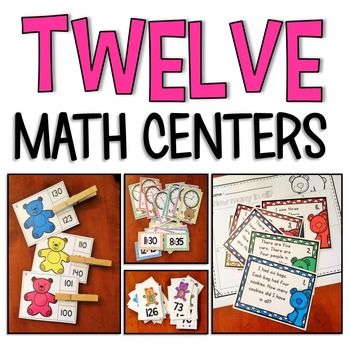 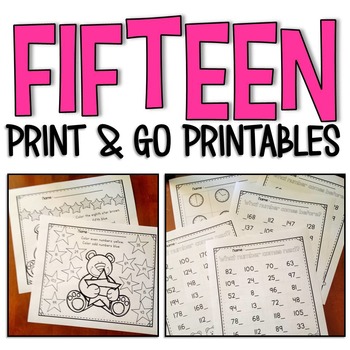 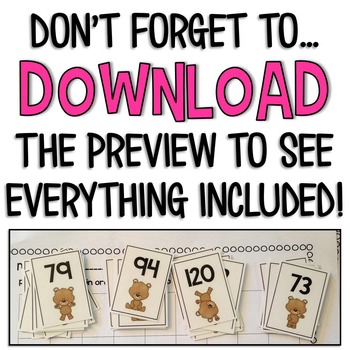 Here is what is included:
1.Subtraction True/False Math Fact Sort: Students sort the 24 math facts under the true/false header cards. If the answer is correct is goes under true. If the answer is incorrect it goes under false. Yes/No header cards are also included if you prefer to use those rather than True/False. A recording sheet is also included.

2.Counting by 10’s: Students arrange the counting cards in order from 10-500. Two versions of a recording sheet are included. The first one goes to 100. The second sheet goes to 200. These cards fit perfect in a pocket chart.

3.Ordering numbers: Students arrange the cards in order from least to greatest. There are 4 sets with 8 cards in each set. The numbers range from 1-120. Two different recording sheets are included.

4.Missing Addends: Students fill in the missing addend on 15 addition facts. A recording sheet is included.

6.Teddy Graham Graphing: Use honey, cinnamon, and chocolate teddy grahams to graph. Students can also “tally” to show the amount for each different kind. Make a class graph too. All graphing sheets are included. You just need to purchase teddy grahams.

7. Story Problems: Students read the story/word problems on each card and record their answer on the recording sheet. There are 8 story problem cards included.

9. Missing Numbers: Students look at each card and record the missing number. The cards have missing numbers counting by 2’s. 12 cards plus a recording sheet are included.

12. Even & Odd Sort: Students sort the 48 number cards into stacks of even and odd numbers. The numbers range from 1-200. Use them all or pick out just the numbers you want to use. Even and Odd header cards are also included.