Math Around the World Task Cards 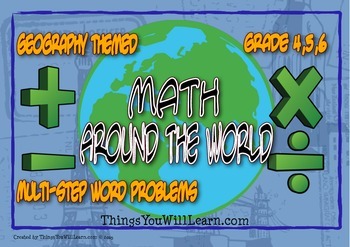 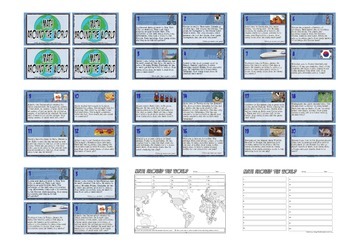 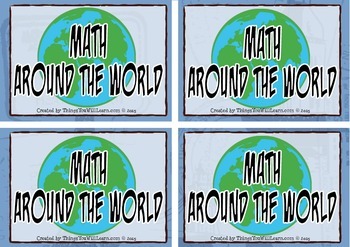 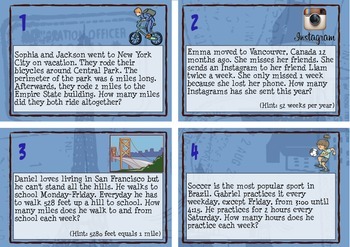 More fromThings You Will Learn

Math Around the World has twenty geography themed multi-step word problems with a focus on addition, subtraction, multiplication and division. Four of the task cards deal with measurements so two versions are provided; imperial and metric.

Each task card references a city and or country which the student locates on the included answer sheet after solving the problem.

An A4 size world map is included in the packet.

An answer sheet without the world map is also included should you prefer to simplify the expectation.

These are perfect for your math center. These double-sided task cards can be easily printed with the task card on one side and a backing card on the other. They can be easily folded, cut and laminated.
_______________

Math Around the World by Michael Allen Kelly is licensed under a Creative Commons Attribution 4.0 International License.
Total Pages
13 pages
Answer Key
Included
Teaching Duration
N/A
Report this Resource to TpT
Reported resources will be reviewed by our team. Report this resource to let us know if this resource violates TpT’s content guidelines.

Log in
to see state-specific standards (only available in the US).
CCSS4.OA.A.1
Interpret a multiplication equation as a comparison, e.g., interpret 35 = 5 × 7 as a statement that 35 is 5 times as many as 7 and 7 times as many as 5. Represent verbal statements of multiplicative comparisons as multiplication equations.
CCSS4.OA.A.2
Multiply or divide to solve word problems involving multiplicative comparison, e.g., by using drawings and equations with a symbol for the unknown number to represent the problem, distinguishing multiplicative comparison from additive comparison.
CCSS5.OA.A.1
Use parentheses, brackets, or braces in numerical expressions, and evaluate expressions with these symbols.
CCSS5.OA.A.2
Write simple expressions that record calculations with numbers, and interpret numerical expressions without evaluating them. For example, express the calculation “add 8 and 7, then multiply by 2” as 2 × (8 + 7). Recognize that 3 × (18932 + 921) is three times as large as 18932 + 921, without having to calculate the indicated sum or product.

Things You Will Learn