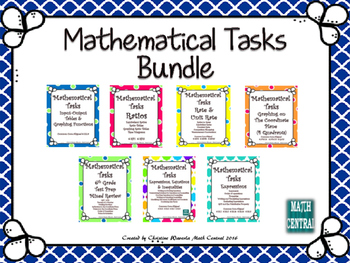 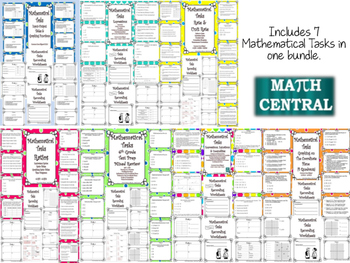 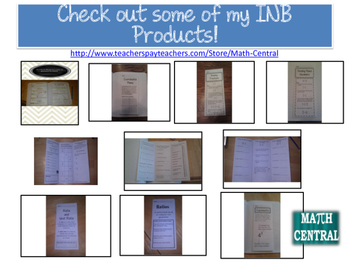 Math Central
1.4k Followers
Follow
Compatible with Easel Activities
Some resources in this bundle can be made into interactive versions that students can complete on any device. Easel is free to use! Learn more.

I love bundles! I bundled all 7 of my Mathematical Task resources into one handy file. By buying this bundle you will save $5.00.

Included in this bundle are the following resources:

Plot and label ordered pairs on the coordinate plane.

Describe the x-axis and y-axis

Indicate the quadrant a point lies

Reflect points across the x-axis

Reflect points across the y-axis

Calculate the distance between a pair of points using absolute value

Find the perimeter and area of the geometric figures

Graph and identify which function is steeper

Use a tape diagram to solve word problems

Encourages the development of other strategies

Determine if rates are equivalent

Calculate the rate of speed

Create a ratio table for a unit rate problem

Graph a ratio table on a coordinate plane

Find the GCF for a given set of numbers.

Find the LCM for a given set of numbers.

Find the percent of a number

Reflect points in the coordinate plane

Order of operations with exponents

Distance on the coordinate plane

Use the GCF and the distributive property to write equivalent expressions

Determining Solutions for Equations and Inequalities

Determining if a number sentence is true or false when a value is substituted for a variable.

Solving One Step Equations and Inequalities

I recommend printing these task cards in color and laminating for years of use. Students are more motivated when they see the color tasks.

Check out my Print n' Folds.

Visit my blog and follow for ideas and freebies.