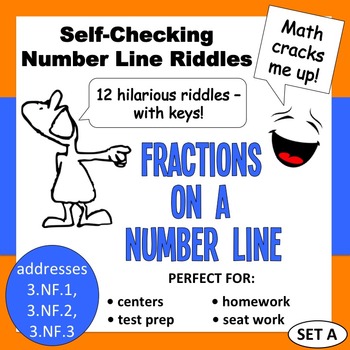 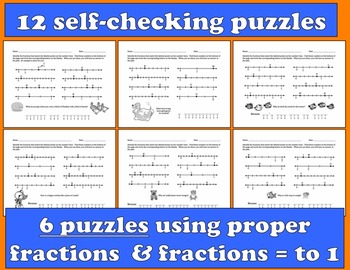 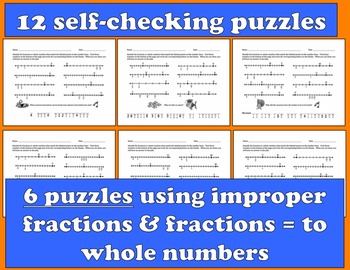 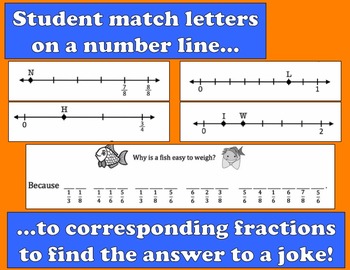 (11 MB|12 pages)
Product Description
These twelve self-checking number line riddles focusing on interpreting number lines using fractional intervals are a great resource for classwork, centers, or homework. My kids love doing riddles like these (though I think what they love even more is telling me how corny the jokes are). I, of course, love being able to quickly grade an entire stack of papers!

These twelve puzzles were designed to build students’ flexibility with fractional number lines. Each sheet features eight number lines marked with lettered points. The students have to identify the fraction that each lettered point represents, and then place those letters on numbered blanks to reveal the answer to a joke.

The first six puzzles use only proper fractions and fractions equal to one whole. All of the number lines on these puzzle sheets use unit fractions as intervals and the fractions used on the number lines are limited to those with denominators 2, 3, 4, 6, and 8. Some of the number lines use 0 and 1 as their end points, some use a fraction as one or both endpoints, and others provide labels for two consecutive points and students have to work forwards or backwards to figure out the value of the labeled points. The number lines purposefully vary from the traditional “from 0 to 1” to force students to have to think outside the box and do a little more reasoning than they might otherwise do, but also to make them think more flexibly about number lines.

The second set of six puzzles feature number lines that involve improper fractions, including fractions that are equal to a whole number (such as 12/4 or 18/3). As with the earlier puzzles, the denominators are limited to 2, 3, 4, 6, and 8. In addition, none of the whole numbers used on the number lines are larger than 10, and the majority of the whole numbers represented by the fractions are 6 or less. The number lines on these puzzles all use unit fractions as intervals, but are varied in how the points are labeled, with some number lines showing the placement of 0 and 1 and others labeling points with fractions in way that students will have to do some reasoning beyond simply counting tick marks..

There are many ways in which you can use these puzzles pages beyond the suggestions above. Your students can complete them on their own, in pairs, or in small groups. The riddles can be used as center work, drill, classwork, assessment, or homework. The riddle pages have a range of 9 to 15 problems, so none of them should take very long to complete, and keys are included for all six, so scoring should not take too long either! [Though since these are self-checking, your grading workload should be light ☺]


Looking for more practice with adding and subtracting with number lines or fractions? Check out:


I hope your students enjoy these resources and are able to build their proficiency with fractions. – Dennis McDonald
Total Pages
12 pages
Answer Key
Included
Teaching Duration
N/A
Report this Resource to TpT
Reported resources will be reviewed by our team. Report this resource to let us know if this resource violates TpT’s content guidelines.