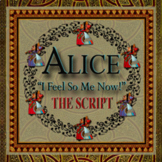 By Terri New Incite Creativity
ALICE “I Feel So ME Now!” – The Script AudioThis musical is based on Lewis Carroll’s “Alice’s Adventures in Wonderland”. A 1½ hour musical play. · Script of ALICE “I Feel So Me Now!” (54 Pages) · THE SCRIPT AUDIO of the play. Alice, I Feel So Me
Subjects:
Other (Arts), Vocal Music, Drama
Grades:
Not Grade Specific
Types:
Posters, Activities, Songs
$18.99
Digital Download ZIP (73.84 MB)
ADD TO CART
WISH LIST

A Miniature Theater Production featuring ALICE "I Feel So ME Now!" - A Musical

By Terri New Incite Creativity
Create a storybook theater you make out of a cardboard box! A fun and engaging project for all levels of talent! Based on Terri New’s musical adaptation of Lewis Carroll’s “Alice in Wonderland” entitled: ALICE “I Feel So Me Now!” PDFs ❖ Instructions
Subjects:
Other (Arts), Music, Drama
Grades:
Homeschool
Types:
Projects, Activities
$60.00
Digital Download ZIP (845.99 MB)
ADD TO CART
WISH LIST

ALICE “I Feel So ME Now!” Musical Production Digital Backdrops

By Terri New Incite Creativity
ALICE “I Feel So ME Now!” Musical Production - Digital Backdrops With our backdrops you can have a show in your living room, school shows or community theater performances. These PowerPoint digital backdrops (23 Slides) for ALICE “I Feel So ME
Subjects:
Music, Vocal Music, Drama
Grades:
Not Grade Specific
Types:
Activities, Songs
$18.99
Digital Download ZIP (40.83 MB)
ADD TO CART
WISH LIST 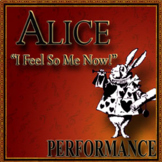 THE REHEARSAL TRACKS - Scales for Soprano and Alto Voices

By Terri New Incite Creativity
A MAD HATTER’S VICTORIAN THEMED TEA PARTYA Grand Pre-Event Special to go along with your production of ALICE “I Feel So ME Now!“ Invite your audience to get in the spirit and engage in a “Mad Hat” contest! A Tea Party is not a Tea Party without TEA!
Subjects:
Cooking, Other (Arts), Other (Music)
Grades:
Not Grade Specific
Types:
Projects, Activities
$8.00
Digital Download ZIP (49.12 MB)
ADD TO CART
WISH LIST

ABOUT LEWIS CARROLL – The Author of “Alice’s Adventures in Wonderland”

By Terri New Incite Creativity
Foam Rubber Art for CostumingHere’s a Step-by-Step guide in a ten-page PDF and a YouTube Video Link! Use your imagination in creative costuming. It brings out the artist in everyone! We created this for our comprehensive musical theater arts
Subjects:
Theater Arts, Other (Arts), Drama
Grades:
Not Grade Specific
Types:
Projects, Activities
FREE
Digital Download PDF (8.21 MB)
WISH LIST
showing 1-9 of 9
Ask Terri New Incite Creativity a question. They will receive an automated email and will return to answer you as soon as possible. Please Login to ask your question.
TEACHING EXPERIENCE

Multimedia Production, Curriculum Development , Music Composition and Performance. Narration and Voice-over Skills. Video Production. Developing Marketing Materials, Social Media Consultant, Computer Skills in many and varied software. Graphic and Web Design skills. Terri New, has a history of producing a unique blend of Arts & Activism, such as with Project Booklift, a nationwide project which airlifted 400,000 books to the new democracies of Eastern Europe. Ms. New was awarded the Santa Barbara Woman of the Year for 1995 and the Soroptimist’s Woman of Distinction in Los Angeles and Santa Barbara in 1993. In David Forward’s book - Heroes After Hours, in which she is featured, she is described as a woman “who makes things happen.” As a Producer, Writer and Videographer, she specializes in creating multi-media applications. Terri created and developed a musical theater arts curriculum which garnered a STAR review from the Library Journal described as “amazingly accessible”. Terri also Executive Produced a curriculum with The California Seafood Council (CSC), about "Fisher Folk" in collaboration with the California State School of Education which was distributed throughout the California K-12 schools. She composed the musical score for the series. Creator/Producer of many national and international projects, she has been producing many different kind of artistic projects for 30 years. Terri has been a singer-songwriter-recording artist for 30 years and her arranger/partner is Bob Esty who has produced the likes of Barbara Streisand, Bette Middler, Donna Summer, Cher, Julio Iglesias to name a few. As a playwright, in 1990 Terri wrote and produced with Bob, Voices of the Velvet Revolution at the Wilshire Ebel Theater. They took the show to Europe with Poet James Ragan, a Pulitzer Prize nominee with Terri performing the songs of the show. In 1991 she created a documentary “Rebirth of a Nation,” and associate-produced this with KEYT, an ABC affiliate, which won the Golden Mike Award for best documentary. She produced a project in India on Rotary International’s Group Study Exchange (GSE) and shot footage for the Rotary Polio Plus Campaign. Terri also produced many video and marketing projects on the Fishing Industry through the CSC. Terri produced a CD-ROM highlighting the work of internationally renowned photographer Emil Muench. Among projects currently in production are several V-blog promotional projects for African Safari Companies, highlighting the safari experience. She also worked on a series in Association with Riverun Productions of NY, “Master Teachers of American Theater” shot in New York City and at the Yale campus in Connecticut with notables of the theater world as Earle Gister and Ming Cho Lee, illustrating their impact on several generations of American actors.

As a producer/director of many and varied projects entailing many age groups. What I strive to do is bring out the best in an individual and nurture their talents… And how to do that? I believe instilling confidence in people’s abilities and in whatever you do. A core principle is that you try to do it to the best of your ability. There’s really no shortcut to creating something great, it’s called putting in the time. Rehearsing…strengthening musculature that’s in every aspect of production whether it’s the physical, mental, and the emotional arena in performance, all that comes into play. So to be great at something takes hard work and a certain amount of courage to put yourself out there. You need to become so familiar with the subject that it becomes like second nature. That is speaking primarily in terms of my theater arts and performance. But in regards to my other curriculum and to a big bulk of my multimedia work, is the aim to inspire, to expose people to adventure and exploration, to peak people’s curiosity, to give exposure to things of our wider world. The more we can embrace this world and all of its wonderful diversity, whether it’s in wildlife or amazing people doing amazing things, the more we will care about what happens to it. I believe you can produce something great when you believe you are capable …and I think the majority of teachers understand this completely.

University of the Pacific - Liberal Arts BA (Emphasis on - English. Political Science) Self Taught and Certifications in many and varied software...some still exist some don't. World Traveler