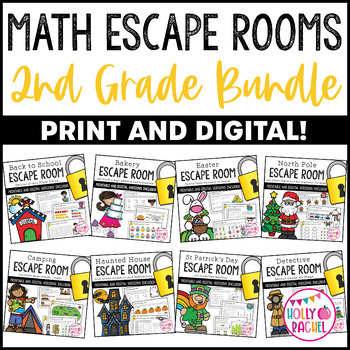 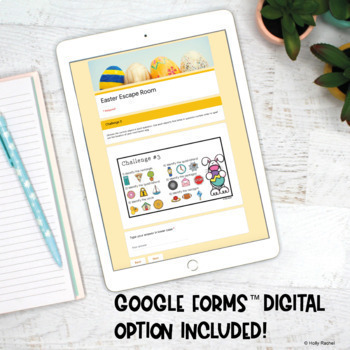 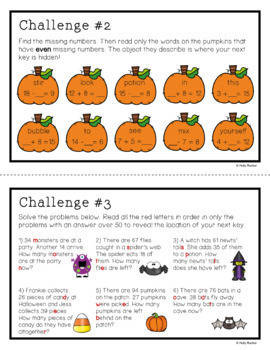 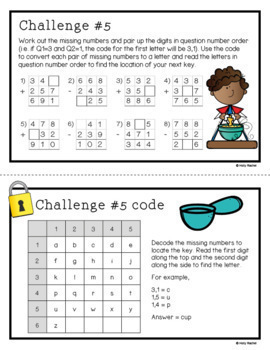 Seven Second Grade Math escape rooms included! This escape room bundle is a fun and engaging way for your students to apply and practice math skills including addition, subtraction, geometry, data handling and algebraic thinking, as well as being a fantastic opportunity to develop logical thinking and team work skills. In each escape room students solve a series of five clues in order to complete the challenge! For each team, you will need to supply seven 6"x9" envelopes to place the clues into. If you are using the Google Forms digital version, you and your students will need access to your own Google accounts.

Print, cut out and place the student letter, clue cards, clue code breaker cards and key cards into envelopes and attach the cover image to each envelope. Print the spring garden location cards and display around the classroom, placing the corresponding envelope near the locations.

Each escape room can be played as a printed paper version (with the option for a scavenger-hunt style game) or it can also be played as a digital activity using Google Forms, requiring no-prep!

For each escape room, addition sets for 4 teams teams are included, so 5 teams can play the game at the same time, all starting off on different clues. The additional cards are color coded for each team.

★ Understand that the three digits of a three-digit number represent amounts of hundreds, tens, and ones

★ Compare two three-digit numbers based on meanings of the hundreds, tens, and ones digits, using >, =, and < symbols

★ Measure the length of an object using rulers

★ Measure to determine how much longer one object is than another

★ Recognise 2D shapes with specific attributes, i.e. given number of sides and angles

★ Recognise 3D shapes with specific attributes, i.e. given number of vertices or faces

★ Two-digit addition and subtraction including regrouping

★ One step addition and subtraction word problems within 100 including regrouping

★ Mentally add and subtract within 20

★ Identify even numbers up to 20

★ One step addition and subtraction word problems within 100 including regrouping

★ Mentally add and subtract within 20

★ Identify odd and even numbers up to 20

★ Pair even numbers within 20

★ Match arrays to equations of sums of equal addends

★ Three-digit addition and subtraction including regrouping

★ One step addition and subtraction word problems within 1000 including regrouping

What's included in each escape room:

★ Location cards to display around classroom

Receive TPT credits to use on future purchases

• Simply go to your My Purchases page and click the Provide Feedback button next to your purchase. You will be taken to a page where you can leave a quick comment and rating. By doing so, you will receive credits which you can put towards future TPT purchases to reduce their price! I value your feedback and love receiving your comments on my resources. ☺

Be the first to know about my latest resources, freebies and discounts

• Click here to receive my latest updates and become a follower!

★ Join my newsletter and receive an instant free resource!

Log in
to see state-specific standards (only available in the US).
CCSS2.OA.A.1
Use addition and subtraction within 100 to solve one- and two-step word problems involving situations of adding to, taking from, putting together, taking apart, and comparing, with unknowns in all positions, e.g., by using drawings and equations with a symbol for the unknown number to represent the problem.
CCSS2.OA.B.2
Fluently add and subtract within 20 using mental strategies. By end of Grade 2, know from memory all sums of two one-digit numbers.
CCSS2.OA.C.3
Determine whether a group of objects (up to 20) has an odd or even number of members, e.g., by pairing objects or counting them by 2s; write an equation to express an even number as a sum of two equal addends.
CCSS2.OA.C.4
Use addition to find the total number of objects arranged in rectangular arrays with up to 5 rows and up to 5 columns; write an equation to express the total as a sum of equal addends.
CCSS2.G.A.1
Recognize and draw shapes having specified attributes, such as a given number of angles or a given number of equal faces. Identify triangles, quadrilaterals, pentagons, hexagons, and cubes.