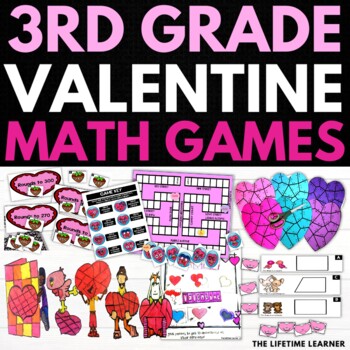 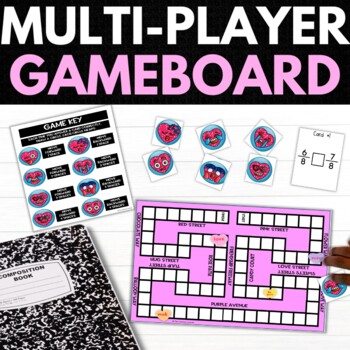 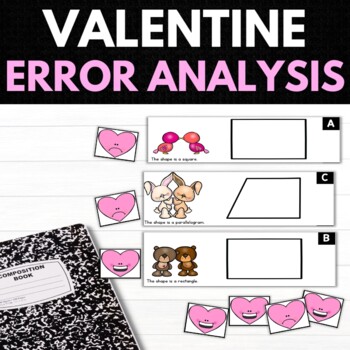 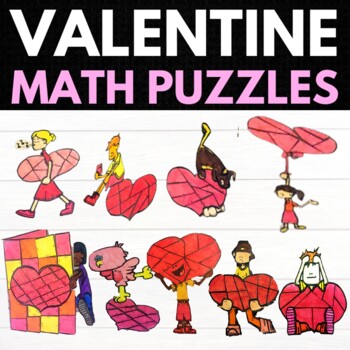 Looking for Another Grade Level?

Students look at each card and decide if the statement matches the shape. Then, students put a happy heart or a sad heart next to each one to show their thinking. An answer key is included.

Each time a student answers a card correctly, the student then chooses a circle card randomly. The circle card tells whether to go forward or backward. The first person to make it to the finish line wins! Answer key included. Task cards practice comparing fractions.

Each time students answer a task card, they get to add a Valentine’s Day decoration to their “Valentine card” or take an item off another player’s mat. You never know who’s going to win based on this twist. All task cards include multiplication and division word problems. First one to have 10 decorations on their card wins.

Students look at each chocolate strawberry. They use their rounding skills (to the nearest ten) to determine which chocolate box each strawberry belongs in.

Third graders put together the 10 multiplication puzzles OR 10 division puzzles. You can choose if you’d like students to practice one skill or both. Each puzzle reveals a different Valentine’s Day picture when put together. Total of 20 math fact puzzles are included.

There are 2 versions included so you can practice multiplication facts OR division facts (or mix them together and practice both!)

-Step 1: Cut puzzles into pieces. Scatter pieces all over your classroom.

-Step 2: Have students find the colored pieces that belong to their team. Once the team has found all of their colored pieces, they try to be the first team to finish putting their heart back together again.

Have you ever wanted a FUN activity that is 100% editable and can be customized to any age level / any standard you are teaching? Do you need a game that you can use with the whole class OR just a few students? Something that can be used over and over again without becoming boring? Look no further! Every student I've ever encountered has LOVED the concept of hide-and-seek. In this DIGITAL hide and seek game, students are tasked with finding the hidden object by guessing answers to questions on the screen. In this version, all slides are Valentine-themed and are just right for any holiday season!

And the coolest part? It can work for ANY subject and ANY grade level! Every slide and every question can be edited however you'd like!

How to Play Hide and Seek:

**You can also play this in Google Slides and use it digitally. The way to set it up works slightly differently so make sure to read the included directions. **

Included Hide and Seek Pre-Made Games for You:

Holidays Around the World Math

Kindergarten Holidays Around the World

1st Grade Holidays Around the World

2nd Grade Holidays Around the World

3rd Grade Holidays Around the World

4th Grade Holidays Around the World

Thank you so much,

Purchasing this product grants permission for use by one teacher in his or her own classroom. If you intend to share with others, please purchase an additional license at a discount!